It was a good day for a walk in the city. The day was clear and not too hot, and since I wasn’t doing anything significant (apart from lazing around on a Sunday afternoon) I decided to stroll off to the Flower Show happening in Bangalore.

Every year, on the occasion of Independence Day, Lalbagh hosts a flower show. This year the garden city is celebrating the 206th flower show and it’s dedicated to the great Rashtra Kavi (national poet) Kuppali Vekatappa Puttapa who is fondly called as Kuvempu.

A gallery showcasing the poet’s photographs, literary works, books, etc., can be visited. Stalls showcasing flower, fruits and vegetable arrangements can be seen around the area. You will see a huge arch welcoming the visitors to the flower show. Do look out for the 3-D visualization of the poet’s portrait on the left-hand side as you walk inside the arch.

Gallery where Kuvempu’s work is exhibited

Snippets of Kuvempu’s life, work displayed in a gallery

Arch at the entrance to Flower Show

Fruits, veggies and flowers displayed in a booth

An interesting looking building inside Lalbagh

The road from the arch leads to the glass house which is inside the Botanical Garden. Here is where the many beautiful flowers and plants are exhibited. One can see a huge replica of Kuvempu’s house made out of flowers at the glasshouse. There are beautiful flower arrangements inside the glasshouse. One can also see Cymbidium flowers here, that are grown in Sikkim and Darjeeling and which are originally from Australia and Netherlands. My favourite was the Gerberra and Pansy gardens and the colourful cacti pots. 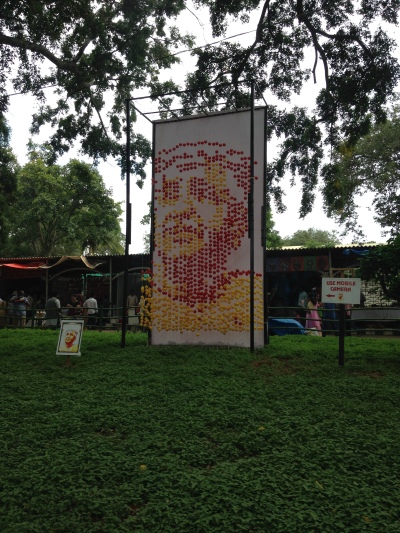 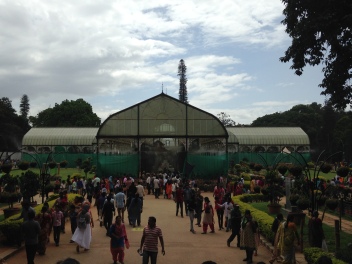 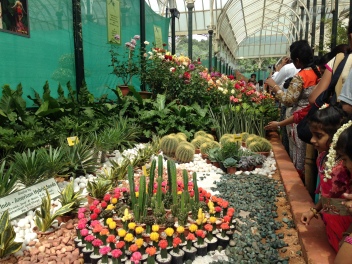 Outside the glasshouse, several stalls and booths are set up. Stroll past these or shop for the varieties of seeds, plants, gardening products and more. I chatted up with some of the exhibitors who gave informative insights about agriculture, horticulture, along with the unique/useful products they were exhibiting. For the first time, I tasted Areca tea and Stevia leaf (Stevia is a natural sweetener and a healthier alternative to sugar). 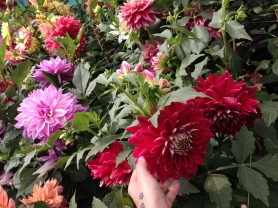 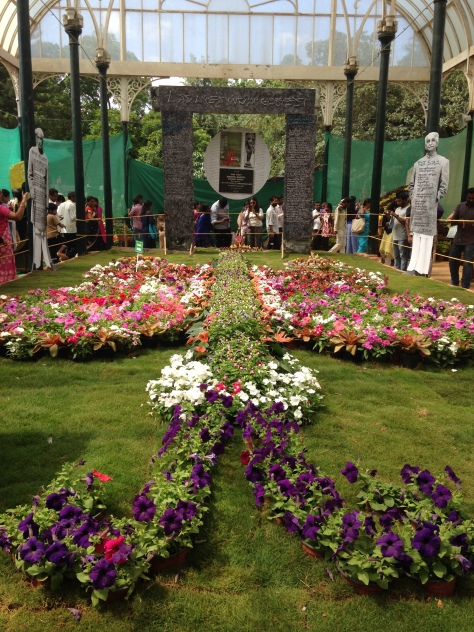 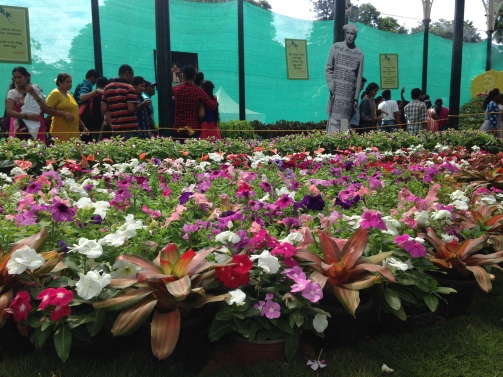 Later, I strolled off to the Peninsular Gneissic Rock Hill or commonly known as the Lalbagh Rock or Lalbagh Hill. This rock hill is a geological structure that is identified to be billions of years old, by the Geological Survey of India. A tower is erected on the hill top and a placard next to it suggests that it is one of the four watchtowers built by Kempegowda marking the predicted limits of the Bangalore town.

The Lalbagh Flower Show is celebrated for 10 days. It was inaugurated on the 4th of August 2017 and will conclude on the 15th of August 2017. The flower show is open to visitors between 9 am – 6 pm. The entry fee per person is Rs. 60 (on weekdays it is priced less) for adults and Rs. 20 for children.

So are you going there? Tell me your observation if you have already been there.

Thank you for stopping by. Would love to read what you have to say, please leave a comment :) Cancel reply

Search On The blog

Just a wandering soul, Yogini is a Creative Writer by profession, a book lover by heart and a little crazy by choice. Loves everything 'Travel'. She finds solace by being in the Himalayas and it's her all-time favourite place to be at. She writes sometimes, reads a lot, and travels as much as she can. And dreams of living in a tiny little house in the mountains, one day! :)

While I encourage debates, healthy discussions, and constructive comments/feedback, please understand well that I will NOT tolerate any irrelevant, disrespectful, offensive, racist, rude, and hateful comments. I retain the right to decide which comments will be approved, and also to remove or edit the comments that I feel are hurtful, unhelpful or harmful in any way.

These travel stories and content are my personal experiences/ observations/ and learnings that I wish to write about and share. All the pictures/artworks displayed are my own and copyright protected (or source-specified to which I do not claim any ownership).

PLEASE DO NOT COPY. If you wish to use any of my content, contact me for permission first at YOGINI.PATIL@GMAIL.COM to avoid any copyright infringement.

Thank you for connecting.